Longjing tea (龙井), literally meaning Dragon Well tea, is a variety of pan-roasted green tea that named after its production region-Longjing Village of West Lake in Hangzhou, Zhejiang Province of China. Longjing tea has a history over 1200 years and is one of the most famous teas in China. It is well-known for its verdant color, beautiful elegant shape, strong fragrance and sweet mellow taste, hence, to be considered as “the Queen of Green tea”. 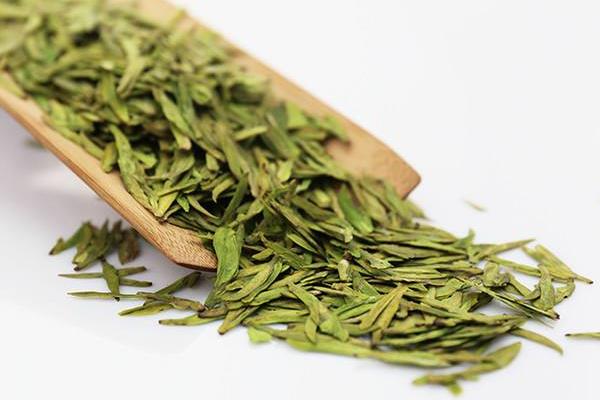 Longjing tea has a long history, but what makes it more famous is an emperor. According to the legend, the Qianlong Emperor (乾隆, 1711-1799 AD）in Qing dynasty often came to the regions south of the Yangtze River and visited Hangzhou. He went to the Hu Gong Temple under the Lion Peak Mountain (Shi Feng Shan狮峰山) and was presented with a cup of Longjing tea, which was picked from the 18 tea bushes in front of the Hu Gong Temple. The Qianlong Emperor was so impressed by the Longjing tea that he conferred these 18 tea bushes as “Royal Tea Trees”.

There is another legend connecting the Qianlong Emperor to Longjing tea. Once when Qianlong came to Longjing Shifeng and learned the tea-picking, his follower told him that his queen mother was ill. After he returned to Beijing, his mother smelt the fragrance of the Longjing Tea that were put in his sleeves from Hangzhou and felt better after drinking the water with the tea. Therefore, Qianlong was so happy that he praised Longjing Tea as tribute and ordered people to pick every year to present for his queen mother. Afterwards, Longjing Tea became more famous as the head of all tea types in China.

Longjing tea is also conntected with Longjing Spring, from where the village, tea and temple got the same name—Longjing. According to legend, Longjing Spring is connected to the sea, where there is endless water. Since there are dragons in the sea, this spring is called “Longjing” (dragon well). The current Longjing Spring is a large circular spring pool. The spectacular thing is, when the spring water is stirred, a dividing line will appear on the surface, swinging gently like a thin dragon whisker and then disappearing slowly.

There are three characteristics of Longjing tea picking: early, tender and diligent. Tea farmers often say, “Tea is an epoch grass, picking three days early is a treasure, while picking three days late turns into grass.” Much importance is emphasized on the seasonality of the leaves being picked. The tea leaves that are picked before Qingming (Tomb-Sweeping Day, April 4/5) are the best, known as Ming Qian or Pre-Qingming Longjing tea; and teas collected between Qingming and Guyu (Grain Rain, April 20/21) are also of good quality, known as Yu Qian or Pre-Guyu Longjing tea; while the leaves picked after Guyu are ordinary.

Longjing tea is also known for its delicate picking. The tenderness of fresh leaves forms the basis of the quality of Longjing tea. Due to the different parts of tea tree, the chance of obtaining nutrients is also different, thus the picking is in the order of top buds first, axillary buds next, and latent buds last. Longjing tea area promotes multiple early harvesting and tender harvesting in batches, which can continuously promote the growth of axillary buds and the germination of latent buds, increase the number of buds and yield. West Lake Longjing tea generally collects 14-16 batches of spring tea, 6-8 batches of summer tea, and 20 batches of autumn tea. A total of 40-44 batches are collected throughout the year. The annual picking period is 190-200 days.

The process of making Longjing tea is very strict. It usually employs iron pans for baking the tea, and it involves ten techniques based on different temperatures and moisture, including: tossing, shaking, picking, fanning, expanding, throwing, grasping, pushing, buckling and grinding. Different quality tea leaves have different frying methods. A skillful tea-making master knows exactly how and when to use a certain technique according to the changes of moisture and temperature. The main processes are as following: 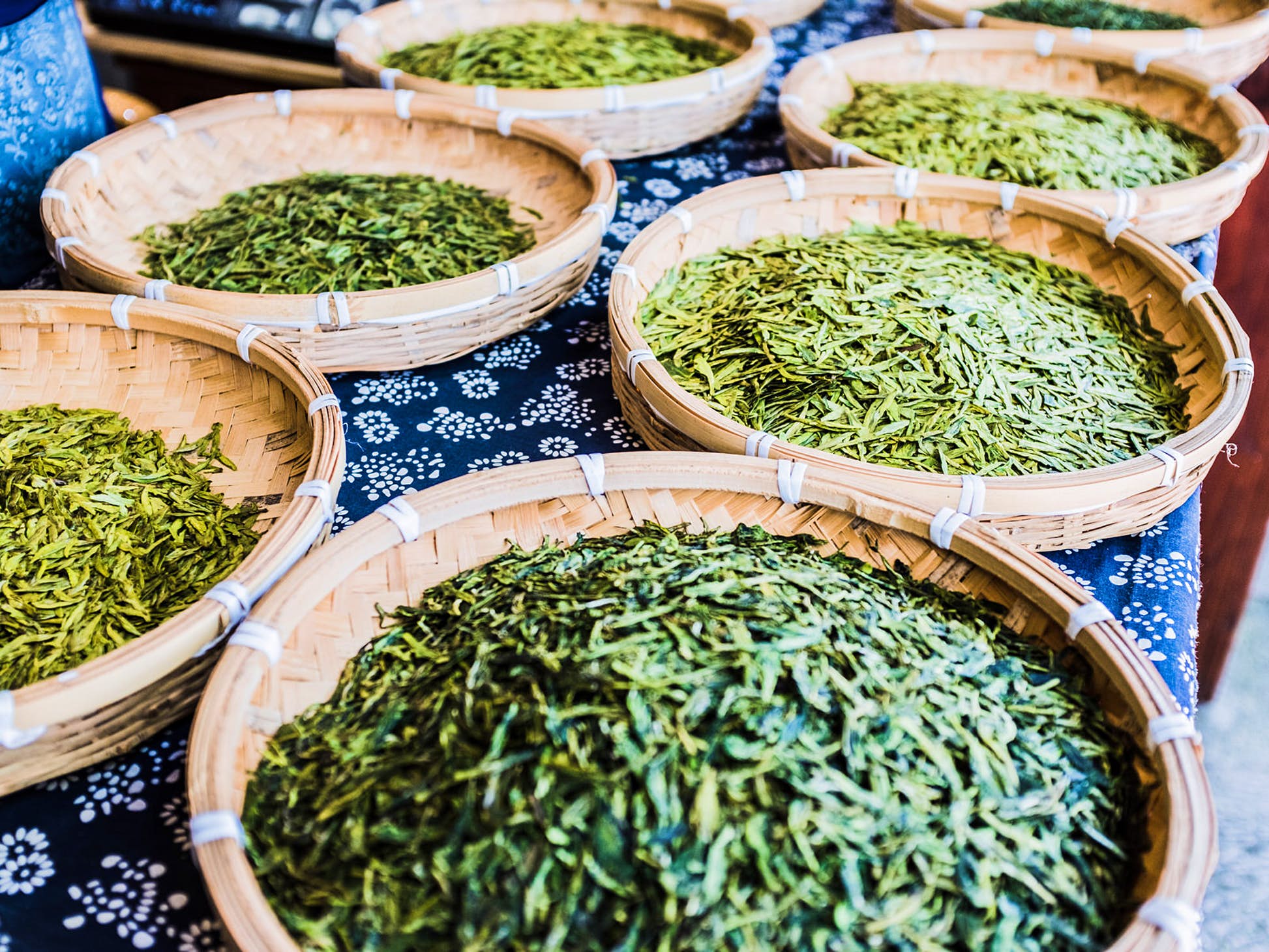 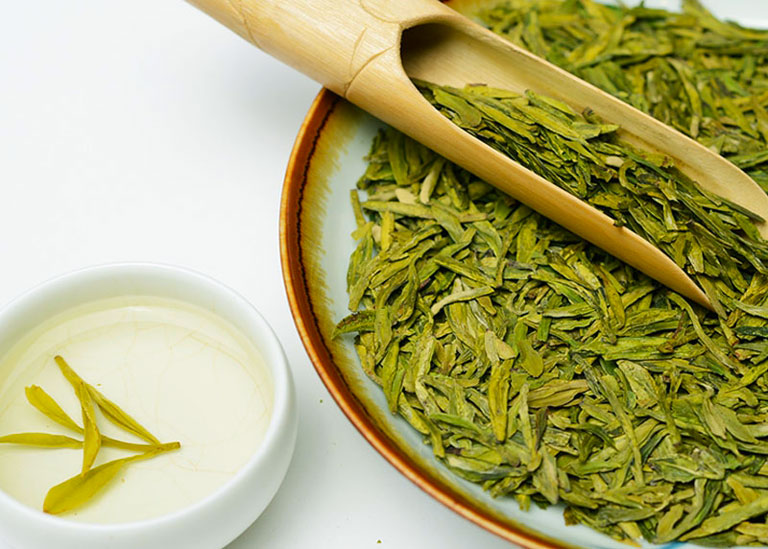 Preparation: Get some Longjing tea, a glass cup, and a bottle of mineral spring water ready, and then put three grams (one teaspoon) of tea into the cup.

Warm tea cup: Pour some boiled water into the tea cup to warm it up. After, pour out the water.

Clean the tea leaves: Pour a little (about 50ml) heated spring water (80°C to 90°C) into the cup. Gently swirl the cup, and then pour out the water, keeping the tea leaves in the cup. This should clean off any dust etc. on the tea from the manufacturing process.

Brew the tea: Pour some tea leaves into the tea cup and then pour in 1/3 cup of water. Shake it well and pour in another 1/3 cup of water. Leave it for 3-5 minutes, a cup of Longjing  tea is ready to be enjoyed. The leaves: water ratio should be about 1:50, which means 150 ml of water for 3 g of tea.

Drink the Tea: Drink the tea in the following three minutes, and you can enjoy a perfect cup of Longjing tea.